The Five Do's and Don'ts of Drinking on an Airplane

A nice glass of wine can really hit the spot as you settle back into your seat, but too many of those nice glasses has been the ruin of countless trips. Don't let a cheap flight be spoiled by overindulgence.

5 Do's and Don'ts of Drinking on Planes

Fortunately, I have a list of tips to help flyers avoid the pitfalls and enjoy the experience of drinking on a plane, whether your beverage of choice is soft drinks or alcohol.

Most of us don't see an airplane as a flying tavern, or an airport bar as the perfect partying spot, but some do. Not smart if you overdo it, because excess alcohol makes some people do stupid things. And those things can get you kicked off a plane. A couple of examples from last month:

News reports say a young woman aboard a Virgin Atlantic flight downed nearly a pint of whiskey before allegedly grabbing a flight attendant and demanding he have sex with her. A UK newspaper described the 25 year old passenger as a teacher.

An 18 year old Olympic ski hopeful saw his dreams dashed after admittedly doing some pre-flight drinking before boarding a JetBlue plane. Due to behavior which reportedly included urinating in the aisle, he was met by the cops upon landing at JFK; he was also kicked off the ski team. 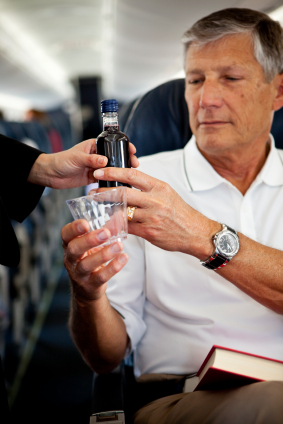 Do Sit on the Aisle

If you think that JetBlue incident was a one-off, think again. Drink too much and chances are you will have to use the lavatory, and the following incidents explain why you should sit as close to the bathroom as possible:

In June, a young man on a Jetstar flight was reportedly drinking heavily when he decided he had to "go" and go he did, all over the aisle and fellow passengers.

Gerard Depardieu claimed a bad prostate combined with an unyielding Air France flight attendant (she barred him from the lavatory due to imminent take-off) caused the actor to use the aisle-as-bathroom, although a fellow flyer thought he'd been drinking.

See 7 Things That Can Get You Kicked Off a Plane

3. Don't Turn Down the Freebies

Here's good news: you may have to pay for meals in coach these days but coffee, water and soft drinks are free on most airlines (along with an assortment of snacks, and it's a pretty good assortment on JetBlue and Southwest). However, get out your wallet if you'll be flying Spirit because that extreme discounter will charge for soft drinks (and charge you a fee for carryon bags!)

Typically energy drinks cost $3 on planes and these over-caffeinated concoctions may be just what you need if you're flying in for a big meeting. Looking to relax? Regional carrier USA3000 will soon start test-marketing a sort of anti-energy drink designed to relax you, called Koma Unwind. Hey, if anyone's tried Koma, please let us know.

Haven't you heard? They're no good anymore. The airline says it will now accept only coupons with expiration dates.

Question for readers: Do you see many drunks on a plane and if you do, how annoying are they?

What Were They Thinking: Worst Drinking-on-a-Plane Incidents