Boarding the Plane: When Should You Get On?

When Should You Board the Plane?

You can search millions of possibilities to find the cheapest airline tickets in minutes, yet the seemingly simple task of boarding 100 passengers seems to take forever, as fliers jockey for space in overhead bins. Why is this so? Science may have a few answers.

In 2008, a particle physicist named Jason Steffan from the Fermilab Center for Particle Astrophysics in Illinois simulated three different boarding methods using a computer model to see which was fastest. Boarding methods tested were:

Surprisingly, random was fastest. Why? Because random boarding results in random avoidance of space conflicts, whereas a standard back-to-front boarding technique almost guarantees multiple people trying to access the same physical space at once.

Steffan's model assumed that the biggest time crunch in boarding a plane is the time required for passengers to stow carry-on luggage. The computer model employed a technique called Monte Carlo optimization, which is used in simulating flow systems with numerous "degrees of freedom," such as movements within collections of disordered materials, which sounds remarkably similar to a gaggle of passengers boarding a plane.

When the theory behind this boarding method was first published back in 2008 in the Journal of Air Transportation Management, nobody paid any attention to it. But Steffan recently conducted an experiment where 72 luggage-carrying "passengers" boarded a replica Boeing 757 airplane with standard dimensions and seat layout using five different boarding methods. To add "real world" complexity, the experiment always allowed parent-child pairs to board first. In the experiment, random boarding came out in the middle, time-wise. The Wilma method was second fastest, resulting in a 40% gain in efficiency.

So Which Boarding Method Was Fastest?

The fastest method was one Steffan came up with himself: 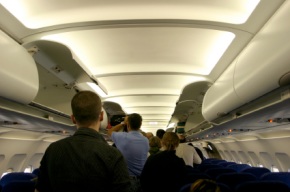 With this method, passengers have enough elbow room to stow their carry-on luggage simultaneously and nobody has to pass people standing in the aisle. It almost doubles boarding speed by minimizing passengers trying to use the same physical space at the same time.

So How Should You Board a Plane

What's your takeaway from these experiments when enjoying those cheap flights you booked? Here's how we break it down for you: