It's not clear if the actor was kicked off his plane because he refused to shut off the unspecified electronic device on which he was playing Words (a game similar to Scrabble) or if he displayed any sort of temper as was suggested in one media report.

American Airlines isn't saying much of anything, although it is known that the airline tried to reach to the actor via its own tweets, saying "Mr. Baldwin, we are looking into this."

Baldwin did get on another American plane after his ouster and proceeded on to his undetermined destination.

According to media reports, country singer/songwriter John Rich of the duo Big & Rich was asked to get off his Southwest flight before take-off from Las Vegas due to allegedly "drunken behavior."

TMZ reports that Rich was "cooperative and calm" as he exited the plane, although before boarding the  aircraft, the 37-year-old singer reportedly got into a verbal argument with fellow passengers.

Southwest would not name the passenger they deemed "unfit to fly," although they did say the customer was given a refund when he opted for alternative travel plans.

Rich made no specific reference to the incident on his Twitter feed, although he apparently enjoyed his time in Nevada, tweeting the following message Monday afternoon: "Had fun with the folks in Vegas! What a great night!"

Whitney Houston almost got thrown off a Delta flight heading from Atlanta to Detroit when she allegedly refused to buckle her seatbelt. In the immortal words of TMZ, the singer "got diva" on a crew member but eventually caved and the flight took off. TMZ also quotes a source close to the singer saying, "she's still 100% sober."

Who is crossing the line – the airline that is – when it comes to the strict rules and regulations of air travel?

Getting kicked off a plane is the new rock star move for celebrities and civilians alike; it's becoming as ubiquitous as trashing a hotel room or smashing a guitar. Check out our carefully chronicled history of people who have been thrown off a plane.

7 Things That Can Get You Kicked Off a Plane

L-Word Actress Claims Southwest Booted Her from Plane for Kissing

Too Fat to Fly: Overweight Passengers and the One Seat-or-Two Airline Option 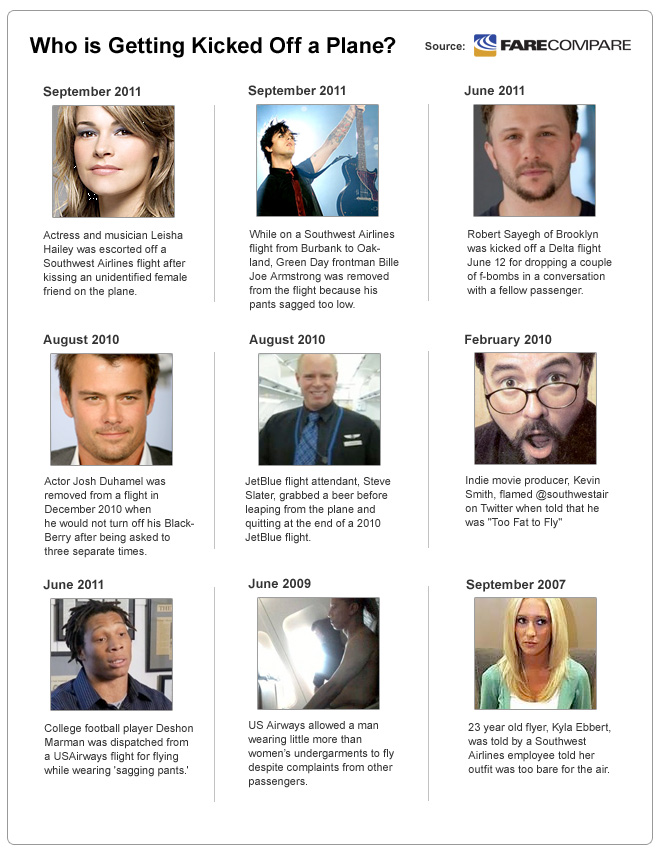