FINAL UPDATE: April 23 – The 6th airfare hike attempt of 2012 has been declared a failure. It did not garner broad-based support, particularly from lower cost carriers including Southwest/AirTran and JetBlue, and was mostly rolled back.

UPDATE: April 20 – 10am EDT – The hike attempt is beginning to falter.

EARLIER:April 17 – An attempt to raise airfare prices for the 6th time this year is now underway.

This latest try at raising domestic fares – by $10 to $20 roundtrip – was initiated by Delta Air Lines, but it should be noted that this increase is onlyfor tickets purchased within a 7-day departure window, and such airfare is typically purchased only by business/corporate travelers and not leisure flyers.

So far this year, we've seen five previous airfare hike attempts and three have been successful, the most recent one taking hold during the last week in March.

At that time, I said I expected more hikes before the busy summer vacation got underway, and that is indeed what's happening now although for a very narrow group of travelers, the road warriors.

We will be watching to see if other airlines join in on this latest hike attempt, and will update when/if there is more hike activity. 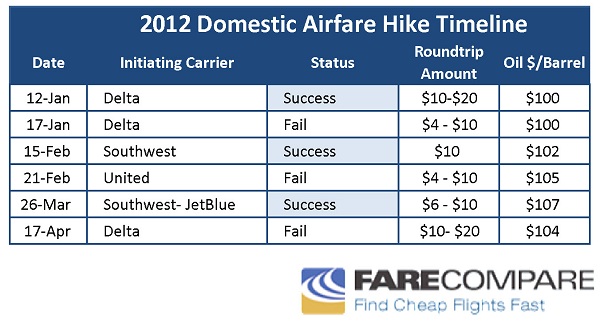