FINAL UPDATE 3-27-12: This latest airfare hike is now declared asuccess. All legacy and lower cost airlines have matched the $6 to $10 roundtrip domestic airfare hike making it the third successful hike of the year.

UPDATE 3-27-12: Many have been asking if more airfare hikes are on the way, and yes, I do expect airlines to ramp-up hikes as we hit the busy summer vacation season, especially if oil remains high. On the bright side, when airline ticket prices hit consumers' "no-go" point – which appears to be getting closer and closer for some – those travelers will stop flying and airlines will notice more and more empty middle seats. That will temper the pace and size of the airfare hikes.

UPDATE 3-26-12 1pm CDT: Delta, Frontier, United, US Airways and Virgin America matched the hike. The only legacy airline that has not yet matched is American but it is likely to do so later today. By the way, in nearly a decade, we have never seen a domestic hike that included Southwest that did not succeed in raising base prices.

EARLIER: An hour ago, Southwest Airlines increased its airfare prices by $6 to $10 roundtrip (or $3 to $5 one-way). The hikes are based on distance across the bulk of Southwest's route system, as follows:

Listen as airfare analyst Rick Seaney explains the in's and out's of the latest airfare hike:

This attempt at a fare increase occurs on the heels of price hike momentum initiated last Thursday evening when JetBlue raised its ticket prices by $10 roundtrip across its smaller route system, and there was some matching by legacy carriers over the weekend.

This is the fifth attempted domestic airfare hike of 2012 (see the chart below); of the previous four attempts, two were successful meaning the higher prices held.

Why the Cost of Your Airline Tickets are Rising

Airlines are raising prices because of an operational cost they have no control over – the rising price of oil for jet fuel (which passed the $107 per barrel mark as of this writing).

Underscoring the choppiness in domestic airfare pricing, Southwest launched an airfare sale just last week. The chaos of seemingly opposing goals occurs as airlines try to boost base prices while at the same time tossing out weekly discounts in an effort to fill those empty middle seats on the slower travel days. 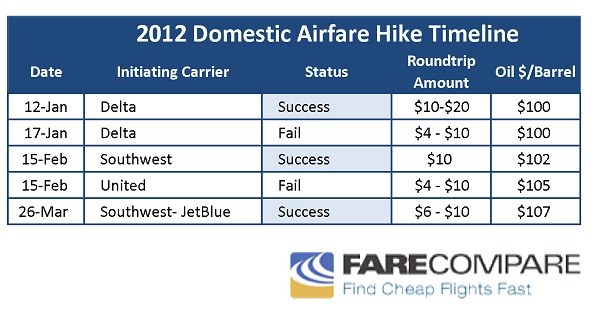