FINAL UPDATE 6:20 p.m. EST: The 15th airfare hike attempt of the year has failed; US Airways which launched the hike on Sat. has now has rolled back its prices.

UPDATE: 2 p.m. EST: Due to the huge volume of airfare data coming in, new information on a couple of hikes is now becoming clearer and the situation has changed from what I reported earlier [see specific details of how and when the hike attempts played out, below].

The 15th airfare hike of the year was actually launched Saturday by US Airways. This is a hefty, broad-based hike of $10 each way, and so far, other airlines are not joining in – which does not bode well for its ultimate success.

Earlier, there was a flurry of hiking activity on certain routes to and from select Florida destinations – a mini-hike, if you will – which was joined in by Southwest on Friday. That sealed its success but as it is a regional hike only, we are not counting it as one of the year's official hikes.

Meanwhile, we will update the US Airways hike attempt as more information becomes available but again at the moment it appears destined for failure.

UPDATE 10:52 a.m. EST: After trawling through the data, it appears Southwest's hike focused on Florida destinations and the matching on Saturday by legacy airlines was a reaction to that particular increase. However, as of Sunday evening, US Airways appeared to be broadening the scope of the hike.

Over the weekend, US Airways begin matching on overlapping routes, but the other big legacy carriers including American, Delta and United are what I call tip-toeing around at the moment, most likely because the hike occurred just before the weekend. I expect to see more matching activity from these larger airlines, and I also expect the hike to stick.

The seven successful airfare hikes so far this year have put a dent in passenger wallets, hiking fares on average by about 4.5%. It's been a while since the last hike, which was launched by United back in October and was ultimately successful. Before that, we've seen airfare hikes every month since July.

Details of the Airfare Hike Attempts

UPDATE Dec. 3 – 3:45 p.m. EST: Over the past several days, hiking activity on both the regional Florida hike attempt and the ongoing broad-based US Airways hike looked like this: 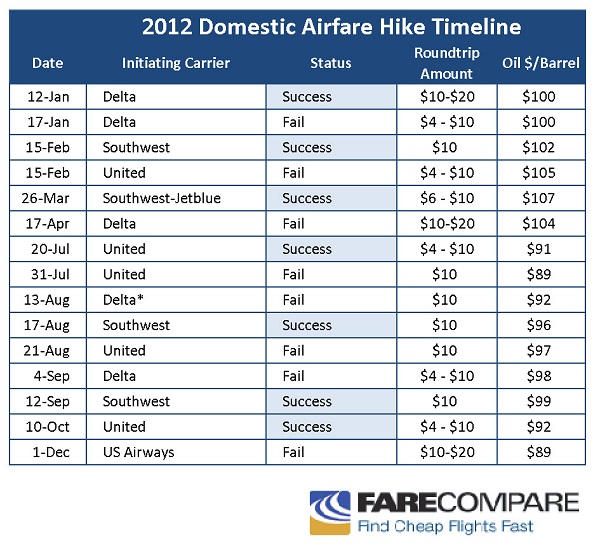